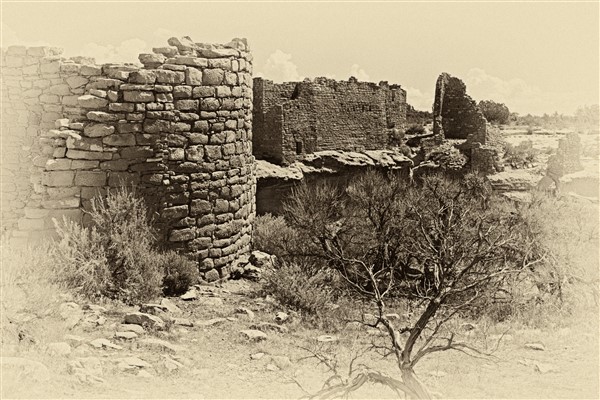 Rocks and Ruins at the Vista Grande Public Library, September, 2022

In a recent Pasatiempo article Santa Fe photographer Alex Traube says “I couldn’t help photograph that rock…and start doing things with it and become enchanted. I surrender to that enchantment.” I too cannot help photographing rocks and, as it happens, ruins. I am drawn to them: a single pebble on a beach, a fat boulder in a sea of pebbles, a collapsed schoolhouse, an abandoned barn. Some rock formations are so fantastic everyone would want to photograph them. The scant but alluring remains of ancient indigenous settlements (such as Hovenweep, pictured above) have attracted photographers since cameras were invented.

Rocks and ruins are part of the landscape and, in this part of the country, ubiquitous. Hundreds of ghost towns, both ancient and relatively modern, dot New Mexico’s map. The land is rife with long extinct volcanic cones which spewed boulders across its surface. The result in both cases is a compelling geometry of light, lines, textures and shadows.

Rocks and ruins both contrast and complement each other. Rocks are solid, often immovable, randomly placed. They suggest permanence, stasis. Ruins are transitory, fragile looking, placed initially with purpose. Both have stories to tell: rocks of the earth’s history, ruins of human intentions. Both evoke questions: how were these solid things that look like peanut butter created? why were these ruins abandoned? The most ancient, enduring ruins were made of stone.

All of that and alliteration too.

El Gancho is a local (104 Old Las Vegas Hwy in Santa Fe) fitness center with tons of wall space they like to have covered with art. A friend was invited to hang her photographs for the month of August but found the space overwhelming and invited a couple of other photographers, to join her. Here’s a poster I made to introduce us to the patrons.

I plan to hang some old favorites:

and there is some wall space just opposite the child care center that I think will be perfect for those Costa Rica monkey pictures for which I promised to make a new gallery (and that may still happen..):

If you have thoughts about this, leave some here.

You can order these books directly from the publisher, Blurb.

My other books are available, but not directly from the publisher. See Buying a Book.

Unless otherwise stated, all photographs on this site are mine. My images are copyrighted. You are welcome to use them provided you credit them to me.